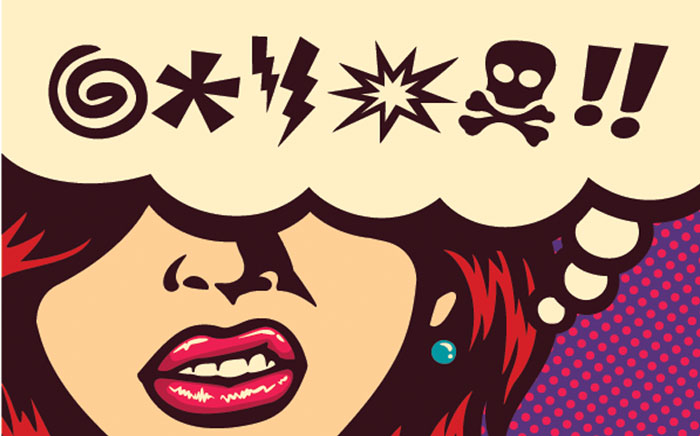 This was a blog originally written by Cass Briscoe and posted in our Autumn 2016 Newsletter but has been updated where necessary. On the 30th September 2016, after we originally posted this article, Ofcom published research into offensive language in TV & Radio programmes. This should serve as a guide but please remember there is more leeway with programme content because it is invited into the home in a way that advertising is not.

If the restrictions we place on different swear words has ever had you wondering “what the f***??”, then you’re not alone. Swearing comes up in advertising more often than you might think. Whether it’s ‘swearword play’, a deleted expletive, or (perhaps most commonly) a film trailer that features less than savoury language, we’ve definitely seen our fair share of potty mouths here at Clearcast. So how do we decide what’s okay and what’s no way?


Our role at Clearcast is to work with agencies to help get their ad on air, and stay there – so it is really important that we take into consideration potential offence of viewers watching and make sure that your ad isn’t being talked about for all the wrong reasons!


Section 4 of the BCAP code, the Harm & Offence section, tell us that:


4.2 Advertisements must not cause serious or widespread offence against generally accepted moral, social or cultural standards.


In December 2000, a research paper published by the ASA, the BBC, the British Standards Commission, and the (now defunct) Independent Television Commission called ‘Delete Expletives?’ featured a series of studies asking various groups on their opinions on different swear words. Participants were given a list of expletives and asked to decide whether they thought each word was acceptable or not, and if it was, what time would they expect it to be broadcast on TV. The results of this formed the basis for what we at Clearcast now use to decide which restrictions different swear words should receive.


We have seen a lot of adverts since that research, containing almost every kind of swear word imaginable, so building on that data we now have a list of words and what timing they have received in the past. Clearcast always strives to be consistent, so if a word has been made unacceptable or received a particular timing in the past, then we are likely to apply this to the same word in the future.


There are occasions where words are up for discussion, usually when context is changed. For example, ‘you silly sod’ would receive an ex-kids restriction, whereas ‘sod off’ would receive a post-9pm restriction as even though the word ‘sod’ is the same, the implication is different.


There was much debate when the 2009 film ‘Inglourious Basterds’ was released and subsequently advertised. Ordinarily the word ‘b*stard’ is unacceptable, however after much discussion and a referral to Copy Committee it was decided that as it was a) the name of the film and b) not spelt the traditional way, that it could be shown on screen- but still not spoken out loud. This arrangement received a (post-10pm) restriction.


Deleted expletives are not acceptable. Either let the word be heard and accept the timing restriction that comes along with it, or if the expletive in question is unacceptable in itself then it needs to come out. Unfortunately a beep is not a viable workaround to sneak swear words in!


‘Swearword play’ is something that is featuring more and more in advertising, perhaps the most notorious example being the Booking.com ads from 2015. This was investigated by the ASA after a large amount of complaints, due to the word ‘booking’ sounding like a substitute for another, less family-friendly word. We did not place a restriction on this and fortunately the ASA agreed with our decision that the copy was considered sufficiently distinct so as not to be confused with a swearword.


An example of a time where the advertiser was not so lucky was in 2015, when Bedworld ran an ad which repeated the phrase ‘ship the bed’. The ASA agreed with us that although the word ‘ship’ sounded like something else, it was a pun and in the context of referring to shipping beds it was okay, so did not uphold the five complaints that deemed the ad offensive. However there were an additional five complaints that the ad was scheduled inappropriately due to the swearword play.  The ASA decided that although an expletive had not been used, that it should be kept away from children’s programming and upheld this part of the complaint. An ex-kids restriction was duly applied!


Ultimately, Clearcast will always work with you to try and get your ad approved, so if you’re ever unsure about whether a particular swear word would be acceptable or not then do get in touch with your Copy Clearance Exec. They will be able to advise you whether a word is acceptable, what timing it might receive, or whether it’s a complete no go. Which is pretty bl***y marvellous, if you ask me.

Necessary Always Enabled
Necessary cookies are absolutely essential for the website to function properly. These cookies ensure basic functionalities and security features of the website, anonymously.
Functional
Functional cookies help to perform certain functionalities like sharing the content of the website on social media platforms, collect feedbacks, and other third-party features.
Performance
Performance cookies are used to understand and analyze the key performance indexes of the website which helps in delivering a better user experience for the visitors.
Analytics
Analytical cookies are used to understand how visitors interact with the website. These cookies help provide information on metrics the number of visitors, bounce rate, traffic source, etc.
Advertisement
Advertisement cookies are used to provide visitors with relevant ads and marketing campaigns. These cookies track visitors across websites and collect information to provide customized ads.
Others
Other uncategorized cookies are those that are being analyzed and have not been classified into a category as yet.
SAVE & ACCEPT